Barons de Rothschild Rare Collection Rosé 2012 Bottle with luxury Box, produced in very limited quantities, is a unique blend of four Chardonnay Grands Crus and a touch of red wine from an exceptional vintage. A prestigious cuvée with perfect harmony, between fullness and delicacy.

As a gift, For a dinner, For a special occasion or an event

As soon as the Champagne House was created in 2005, the Rothschild family settled in Champagne with nothing but excellence as their ambition. Less than a year later, the creation of an exceptional cuvée placed under the sign of a great vintage, like the wines of their greatest Châteaux, completed its foundations.

Presented in its solid walnut box, Barons de Rothschild Rare Collection Rosé 2012 is a precious object made of noble wood. Just like the wood from which it is made, each box is unique, with its own grain and nuances of colour.

The box was made with an environmental dimension: the box is made in Europe and comes from sustainably managed forests. For each box produced, a tree is planted.

A brilliant colour with copper highlights and a fine effervescence.

The finesse of the Chardonnay is combined with the structure and power of the Pinot Noir. Toasted notes of spices and vanilla evoke the partial vinification in barrels. On opening, the aromas of pear and the freshness of the Chardonnay are expressed.

The ample attack, all in lightness and lemony notes, brings tension and crispness, revealing a wine with a beautiful verticality. The persistence on the finish is supported by great complexity and beautiful bitters.

This great Champagne wine will go perfectly with a pink duck breast or a doe with a grand veneur sauce. Its structure will also sublimate slightly spicy dishes of Asian or Oriental cuisine.

Vinification : Vinification is made into small thermo-regulated stainless steel vats of 20hl and a small proportion in barrels.
Long ageing on fine lees for 9 months in small vats with regular stirring.
Ageing on the lees in : 8 years minimum.
Rest after disgorging: 12 months minimum.
Production of the 2012 vintage: 3.300 bottles, 400 magnums.

Characteristics : The 2012 vintage : Sometimes icy and then scorching, the 2012 wine year was marked by a long winter, followed by a cool spring with little sunshine. After hail and torrential rain until the end of July, the heat of August miraculously saved the 2012 vintage. The harvest was small in quantity but of a rare and exceptional quality, making this one of the best vintages of its century. 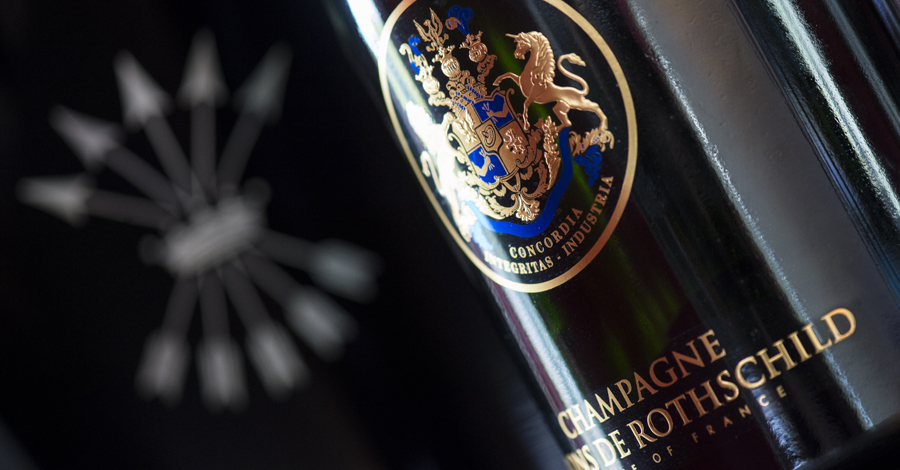 A GREAT NAME FOR AN EXTRAORDINARY CHAMPAGNE
United and driven for over two centuries around values of entrepreneurship, humanism and undisputed quality, the Rothschild family also embodies the art of living, and respect for tradition. Drawing on their wine expertise, Rothschild’s Barons offer excellence with the Champagne Barons de Rothschild. The meticulous work carried out on each cuvée is part of an exceptional quality approach that makes it rare.